Three Sisters and the Blue Mountains 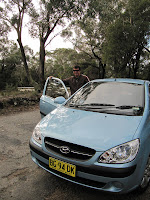 A few days after arriving in Sydney we were ready to venture outside of the city and brave driving on the wrong side of the road.  We headed to the Blue Mountains - which are about 70 miles west of Sydney.

We didn't know what to expect as we headed up the mountain in our tiny blue two door speck.  It wasn't long before we were surrounded by forests of eucalyptus trees.

The views were spectacular, like the grand canyon with trees, the most famous view being the Three Sisters.  There is a story behind the name that has to do with an indigenous Australians myth, but alas it turns out that the myth is completely bogus made up for us tourists. So basically the sisters are three very cool rock formations formed by erosion of sandstone. 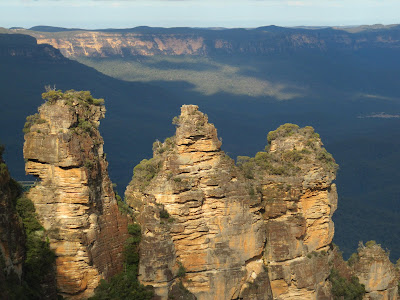 From the Three Sister's Lookout we could see in the distance a tiny railroad and two sky ways - so we headed over to the aptly named "Scenic World" to check it out and take some Scenic World photos.

Scenic World was once a coal mine and is now a world full of scenic activities, I can't do them justice if I try to describe them here, so if you're interested you'll just have to check out the rest of Katymcc's scenic world photos from the Blue Mountains with special bonus video!

Woman. I just checked out your blog for the first time right now. BLUE MOUNTAINS. I lived there for many months: Katoomba, Leura, Lawson. My husband's from Australia. So...groovy!

Lucky! The only thing we were disappointed about was only getting to spend a day there. I really want to go back and hike to some of the waterfalls. What a gorgeous place.