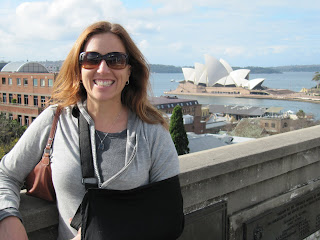 As a get away for my birthday we decided to head to Sydney for a whirlwind week of sight seeing.  Day 1 we arrived after our 14 hour flight at 6am Australia time.

Luckily the hotel - the Shangri-La La La (okay I added the last two La's) let us check in early where we proceeded to sleep off some of our jet lag.

The view from our hotel was pretty spectacular - it was a straight shot of the Opera House and the Circular Quay (pronounced Key, who knew?).

We ventured out into The Rocks which is where our hotel was located. 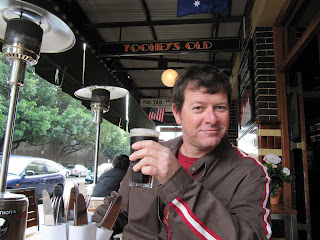 The Rocks is a cool Sydney neighborhood established during the early colonial days in the late 1700s, it was known for attracting sailors and the nefarious businesses that cater to sailors.

They've done a great job of renovating some of the old sandstone buildings. Sydney is a city where old and new seem to be fused together.  Instead of tearing down a building they'll just build a skyscraper behind it, or next to it, or on top of it. Which made for some great photos - which I need to cull out of the 500 photos I took.

But I digress. So our first day we walked for a few hours around the neighborhood - stopping at a local pub to have a tastey Tooeys (see left photo inset) and fish and chips.  I took a ton of pictures, got the most beautiful flower arrangement, accompanied by the best gift of all - a surprise video of my San Diego friends sending birthday wishes my way.