Running a Ragnar Relay, Better than a Pit of Snakes – My Ragnar Race Guide

Ragnar Lodbork may or may not have been a Norse Viking king whose many conquests in France and England made him legendary. He was allegedly killed by being thrown in a pit of snakes.

The Ragnar Relay conquers the challenge of running a 24+ hour relay, in two vans with a dozen of your craziest running friends, and a couple of even crazier drivers. While I wasn’t afraid of being thrown in a pit of snakes, I was afraid of no sleep, smelly runners & being thrown out of a van at 2 a.m. to run. I vowed to never run a Ragnar, but as anyone who knows me knows, I’m more susceptible to peer pressure than a thirteen-year-old. Yes mom, if all of my running friends were doing it, I would jump off a bridge while running too.

Looking to talk your friends into running a Ragnar or have you been talked into running one yourself? Here are a few of the things I learned on during my 27 hour, 200 mile journey.

One of the reasons I was never interested in running a Ragnar was the less than glowing reviews I’ve heard of the So Cal Ragnar course. Plus I live here and run here all the time. Paying to run here and getting no sleep while doing it didn’t seem very appealing to me.

But when my running friends: 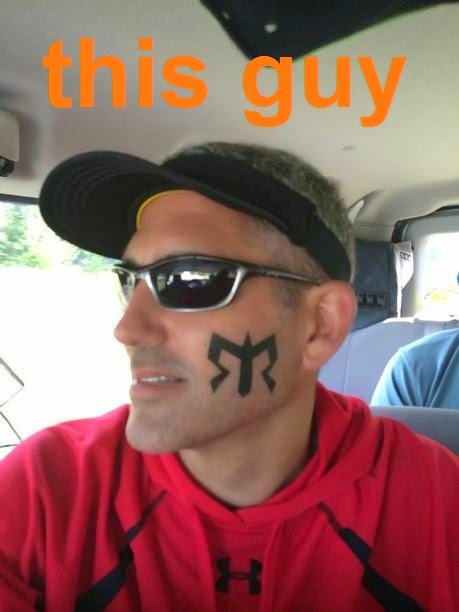 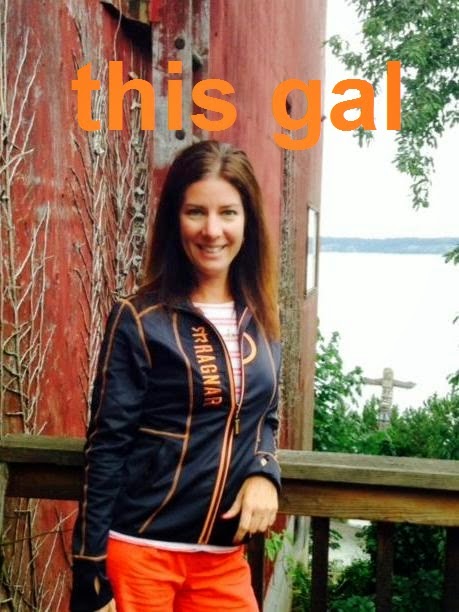 said "let’s run Ragnar Northwest Passage, I double dog dare you", how could I resist? Washington State is beautiful, green, not in the middle of an extreme drought, my mostest favorite uncle lives there, and yes, all my running friends were doing it.

So pick your location wisely. While I’m sure you could have fun running a Ragnar Relay pretty much anywhere, you’ll have more fun if it’s somewhere you’ve never been. 200 miles of places that look like this? Count me in!

Make sure you pick a team captain early, one who’s organized and cracks the whip when necessary. Thankfully the aforementioned "This Guy" volunteered. 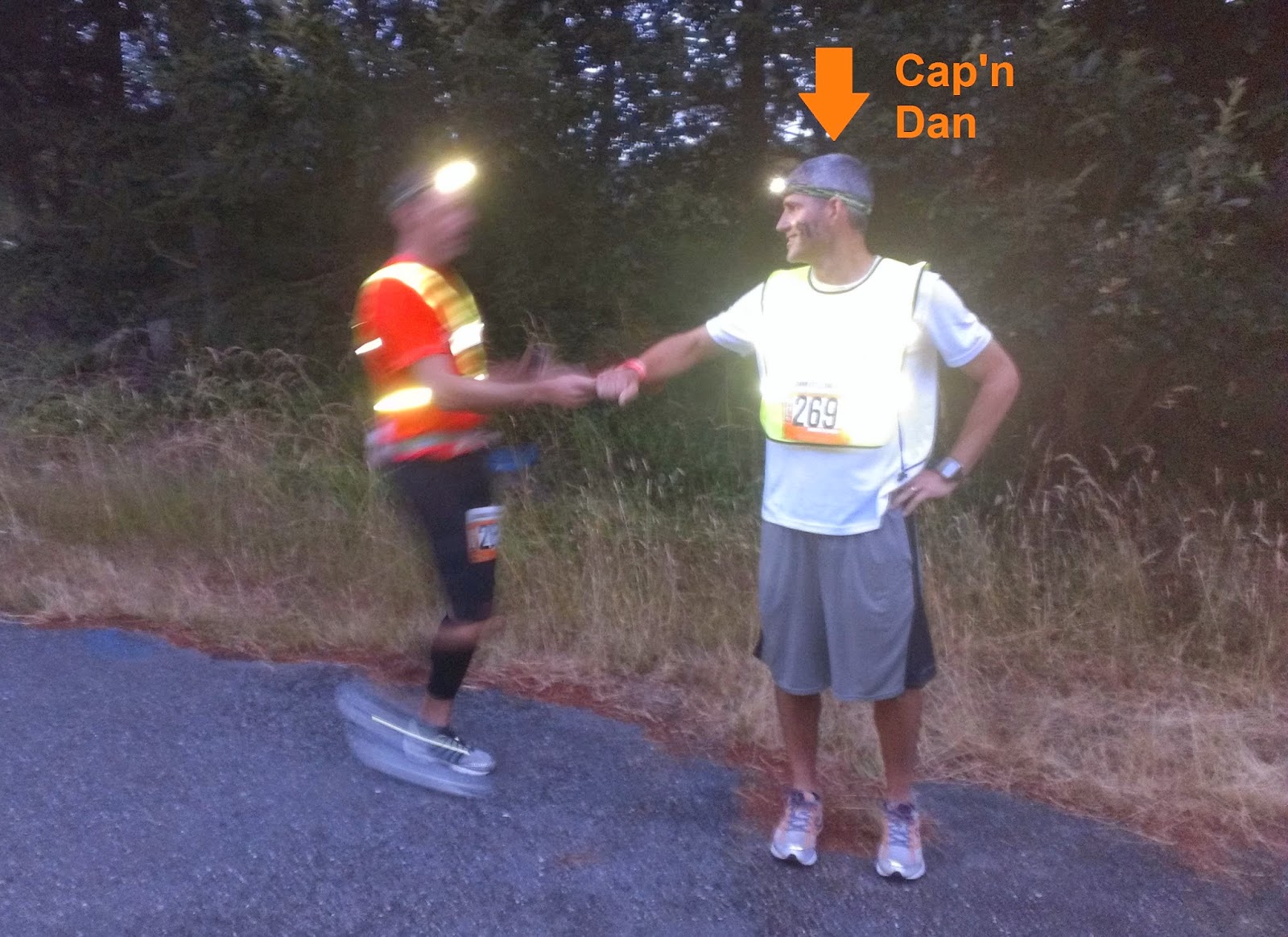 Other than the general coordination of finding 12 runners, getting us signed up, and assigning our legs*, here are some additional things our captain did that made for a smoother race:

Think since you have six runners in your van you don’t need no stinkin’ drivers? Think again. Despite the fact that you may have 7-8 hours between your runs the last thing you want to be doing is driving. So recruit a couple of people just crazy enough to drive you and your sweaty friends around, but sane enough to navigate a ginormous van to 18 or so exchange points.

In our case we had two amazing drivers, one just happened to be my uncle, who as a Boy Scout leader, Washingtonian & eternal optimist was uniquely qualified for the job. The other was a good friend who made us laugh just as hard on our last leg as our first, and as an added bonus, was willing to get paid in coffee. And not the foo foo fancy stuff either, just a plain ol’ cuppa joe.


Scope Out Meals At The Major Exchanges

There are plenty of Ragnar blogs out there (like this one for instance) that will tell you what kind of food you should pack in your van, but consider that your snack food. At some point you’ll be wanting real food, not another bagel or granola bar. Yelp your restaurant options at the major exchanges ahead of time, and for goodness sake, when Uncle Doug tells you to get the potato burrito, get the potato burrito.

Designate a Texter in Each Van

Those few hours when the other van is running are precious; you don’t want to squander a single minute of them. Text the other van when your next to last runner starts running their leg, then again when your last runner starts their leg with an estimate of when you think they’ll be arriving at the exchange. That way you can make sure no one is left holding the baton at the exchange point, and you can sleep, or eat or just rest for as long as possible.

This may seem like a no brainer, but when I say "cheer your runners" I mean "really cheer your runners like cheering is your job." This doesn't mean just meeting them at the exchanges and patting them on the back after they've finished their run, this means stopping along their legs every couple of miles, pulling over, getting out of the van (provided it’s not a "no van support leg") and clapping, yelling, hootin’ and hollerin’. Believe it or not, this helps the runner as much as it helps the non-runners stay awake.

Why Stop at Decorating Two Vans, When You Can Decorate ALL THE VANS?

Silly us. We came up with a team name, bought matching t-shirts and decorated our van. We thought we were doing pretty darn good in the team spirit part of the competition. But little did we know we were woefully unprepared.

When we arrived at the start and left our van to get our bibs and do safety check, we came back a few minutes later to find that among other things we’d been Wet Willy’d, Quacked and our Kills turned to Kilts.

So if you want to tag your competition (and believe me you do) buy lots of magnets with your team logo, and be prepared with your window markers to have your best artist tag the vans around you.

This isn't your standard "every 2 miles there’s a water station" race, on the majority of this 200 mile course there are no volunteers holding out little cups to quench your thirst. So bring your own bottle of water, or have someone in your van hand you a bottle while you’re running (again provided van support is allowed for your leg).

This may seem a little morbid. But "I’m just out here to have fun" you say, "do I REALLY have to kill someone???" Yes, yes you do. A "kill" is a runner you pass during your leg. And believe me, during parts of your 2nd and 3rd leg, it may be the only thing that’s keeping you going. The last thing you want to do is go back to your van and tell them you had zero kills. On my 2nd leg it felt like 90 degrees out, I had a huge hill at the final mile but luckily I had at least one kill in front of me to motivate me to keep running to pass her. As my van passed me I was passing her, and let me say it was glorious.

Unfortunately or fortunately we had just under 200 kills, which meant by the end of the race there were only four teams ahead of us. While it was nice to be so far ahead, it was a bit lonely and a bit scary for those brave teammates who had to run at night when there was no one around but a few coyotes. True story, actual coyotes followed one of our runners!

Okay so maybe there were a few coyotes, abandoned quarries, and scary shipyards, and most of the time our runners were running all alone in the pitch black. But really the night runs are one of the best parts of the whole race. Night runs are when you say to yourself "oh yeah, THIS is why I’m a runner." Alone with your footsteps and the blinking red Ragnar lights to show you where to go, you will wish the run could last forever.


Find a Quiet Place to Sleep

You’ll have about 4 hours during the major exchanges (when the other van is running their legs) to eat, possibly shower, find a place to sleep, and actually sleep. Bring a sleeping bag and an inflatable sleeping pad. You may only get two hours of sleep, better make them count.

Finding a place to sleep is key. With hundreds of other people finishing their legs at different times it’s best to find a place that’s as quiet as possible, as far away from people as possible, and preferably not in the rain. We went to the back of the gym, away from the front door and when we awoke, voila! We were blissfully unaware that the gym had filled up with hundreds of stinky runners because we were in the way back.

Well, What Are You Waiting For?

See? We’re all still smiling after 27 hours of racing. While it took a little convincing to get me to run my first Ragnar, I’ll be the first person to sign up for the next one. Hope to see you out there cheering on your friends and enjoying those 2:00 a.m. runs. But just remember, if I see ya, I’ll kill ya. 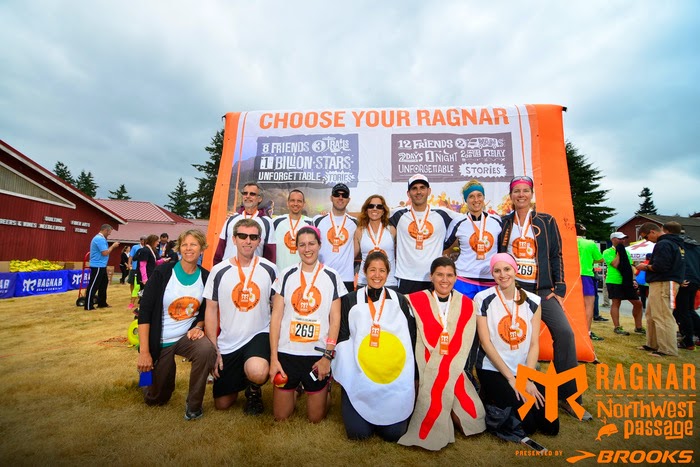 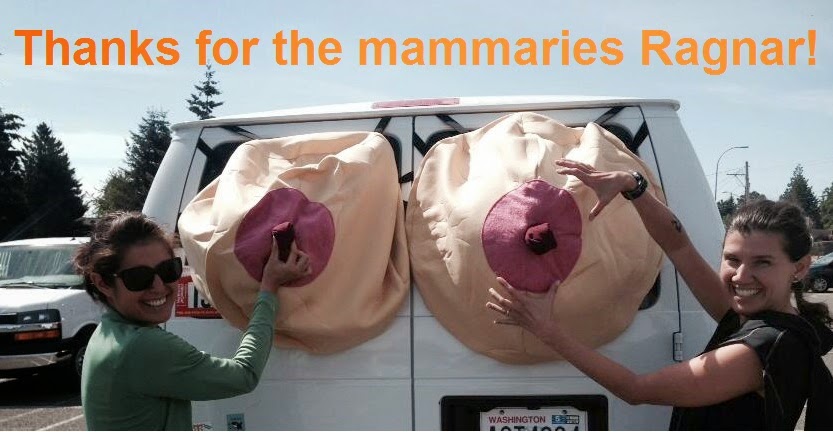 * Each participant runs three times, these times are called a "leg" with each leg ranging between 3-8 miles and varying in difficulty.
Posted by Katy at 11:52 AM