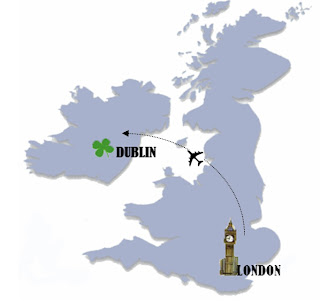 After a short flight from London to Dublin we finally arrived on the Emerald Isle! The airport was small which was kinda nice after navigating our way through the city that is Heathrow airport. We rented a car, looking forward to getting a sporty European car with a strange name, like an Invicta Black Prince Wentworth but instead we got a Ford Focus. Oh well, nice to be supporting the American car industry while we're traveling abroad.

Took us a while to find our hotel (The Drury Court Dublin Hotel), in the rain, down one way streets near Stephens Green. Took us even longer to find the hotel again once we parked. The hotel was older, but clean and the room was pretty big.

Ireland Traveler's Tip #1: When traveling in Ireland, try to find a hotel that includes onsite parking. Spend your time seeing the sights instead of lugging your stuff from your car to your hotel.

We got lost a few times, next time I'll remember to pay attention to landmarks, not street signs, which are hard to find. After checking in we ventured out in the rain to try to find a "contemporary Irish food" restaurant in Meeting House Square in Temple Bar called Eden. The restaurant was recommended by Rick Steves and I swear, when we sat down for dinner and looked around, we were surrounded by American NPR listeners. I wouldn't hold that against them. Little did we know that dinner would be the best meal we had in Ireland, the slow cooked braised beef and beet goat cheese risotto was excellent. The service was even better. Luckily we went early because we didn't have a reservation.

Apparently celebrities go to this restaurant when they're in town, they told us that Sean Penn spent every night there when filming "This Must be the Place". Again, I wouldn't hold it against them.


Ireland Traveler's Tip #2: I can't recommend Rick Steves Ireland Guidebook enough. It gives you the off-the-beaten path places to visit, and also what to look out for in the touristy places.