They Paved Paradise but is it Worth Wasting Film On?

﻿﻿﻿﻿﻿﻿﻿﻿﻿﻿﻿﻿Remember what it was like to wait until the specialist of moments to take out your camera and snap a picture?  If I look back at my prints they were almost all taken on special occasions or special locations.  I didn't take pictures of mundane parking lots back then, just birthday parties, weddings, graduations and summer vacations.

I've been transported back to that time with my Great Uncle Dudley's Vest Pocket Kodak Model B. After finding it in my grandma's closet I took it home and it sat on my shelf for a few years until I finally decided to see if I could buy film for it.  Through the wonders of the interwebs I easily purchased the 127 black and white film it takes and downloaded the user manual so I would have some idea of how to actually use it. 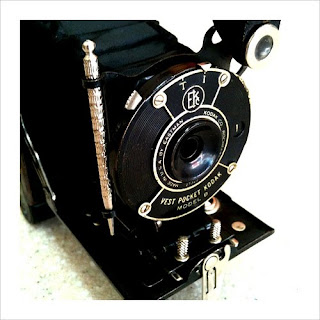 Ironically the film and the cost it will take to develop will set me back about 3x the original $7.50 it cost to buy the camera when it was produced in the late 20s/early 30s.  But I think that's a pretty good deal to make me break from my comfort zone.


Normally I take a ton of digital pictures, then carefully edit them selecting the very best to display to others.  When people compliment my photos I tell them my secret is in finding the few that I was lucky enough to get right.  As my grandpa says "even a blind pig finds an acorn once in a while".  I didn't know that pigs ate acorns, but that's a story for another time. 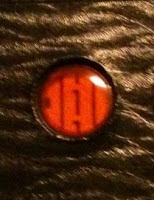 My film arrived and I successfully loaded it.  Not as easy as popping in a digital memory card, but not too hard in the darkroom G fashioned for me.  This weekend I took my camera to a motorcycle swap meet, thinking about all of the great photos I would take of the vintage bikes and how cool they would look on film.
I took my camera out, walked around for a couple of hours, and did not take a single photo.  Suddenly nothing seemed film worthy.  Not the vintage bikes, not the rows and rows of spare parts, not the parking lot.  I took the photo above with my lowly iPhone camera.
It seems strange to be editing my photos before I even take them, but it's a good exercise for me.  It forces me to stop and think about lighting, contrast, composition.  All those things that I learned in my high school photography classes but have chosen not to think about with the luxury of digital.
Today I took my first photo, it was of downtown San Diego from Harbor Island.  A photo I've taken a dozen times so I know it's a good subject.  The viewfinder is a bit hard to see through, and it was hard to keep the camera steady.  So it's very likely that I will again edit the 10 or so photos that I'll get out of my roll of film.  But I'm loving the anticipation of waiting until I find the right subjects, and then again waiting for my film to be developed.  In the meantime, I have plenty of memory in my Canon for all of the parking lots that inspire me but aren't film worthy.
﻿
Posted by KatyMcC at 7:22 PM