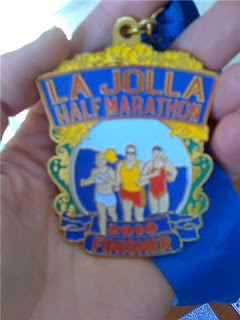 I didn't see this trio at my race today - in fact I know this will sound odd, but I didn't see anyone running in a red one piece bathing suit.

LJ and I arrived at the La Jolla Half Marathon in time for the obligatory porta potty warm up.  This is where you stand in line for a 1/2 hour stretching and bouncing around trying to warm up while you wait with 6500 runners for one of 20 porta potties.

After the national anthem the gun went off and the race was on.  It was definitely one of the most challenging races I've done, riddled with hills from start to finish, both big and small.  Thankfully I had run every part of the route, so I knew what to expect.  I knew that if I could just make it to the top of the hills a beautiful Pacific ocean view was always waiting for me on the other side.

I run most of my races alone, and I've gotten pretty good at keeping my mind occupied and using it as a way to push my body beyond what seems physically possible.  But today I never felt alone.  There were many people along the way that helped me get to the finish line and I'd like to thank just a few of them.  The 5 year old kid at the bottom of the Torrey Pines Hill yelling "come on guys, you got this, you can run that hill", the friendly woman in del mar who instead of sleeping in - stood in the alley making sure we didn't trip on the hidden speedbumps, the woman holding her 2009 triple crown medal telling us to remember why we were running, the SUPER hairy guy who inspired me to run faster to pass him because his sweat soaked pants were falling down, the two ladies ahead of me with the shirts that said "these shirts are filled with awesomeness", the paramedics and police helping the two people that had collapsed on the side of the road, and most of all - my friend LJ, she finished THE GIANT HILL ahead of me, and I could swear I felt the positive vibes she sent my way to help up the hill because all I could think of was "I bet she's already done with this freakin' hill, I want to be done with it too!"

41 short days until I'll be wishing I was running a few hills instead of running 26.2 miles - but I can't think of that right now, I'm just going to sit back, have a steak and a beer, and admire the trio of runners on my shiny new medal.
Posted by KatyMcC at 5:57 PM