Day 7 - No Gymnastics on the Toilet

I HAD to break out my iphone and take a pic while I was in the ladies room today. Okay, so I've heard of squatting over the toilet, but climbing on it performing gymnastics? I don't get it. 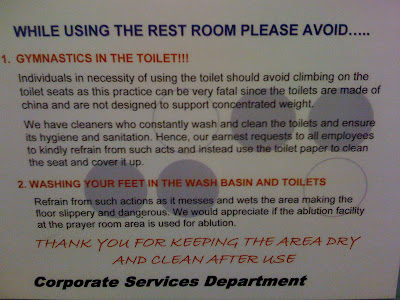 Headed over to the Dubai Mall today, it's very close the hotel and one of the largest in this region. Walked through The Palace Hotel on the way over, very cool hotel, with a lot of cool architectural elements. 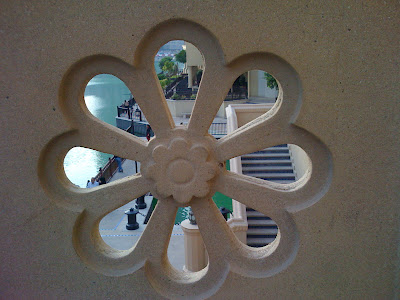 There's a fountain in front of it, done by the same guys that did the one at the Bellagio in Vegas. Every 20 minutes there's a show to music, this pic doesn't give it justice. I forgot my camera in the hotel, and only had my IPhone. Which is really only been useful as a camera on this trip since I refuse to pay $2.50 a minute to use it as a phone. 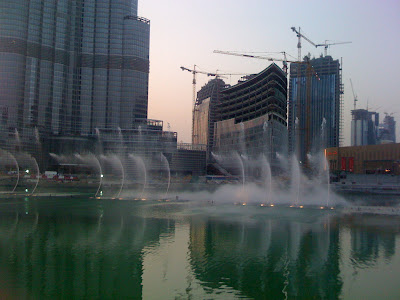 My only significant purchase so far has been medicine. I went to the pharmacy to get some ibuprofin thinking that was about all I could get here for my cold and sore throat and the pharmacist gave me antibiotics! I usually try to avoid medicine and tough it out, but when you're sick and traveling you'll do anything to feel better. Something about not being able to sleep in your own bed makes you feel even more miserable.
But if I was going to buy something, I'm thinking of getting this shirt. I mean, who doesn't love was$ta? There was another one I saw earlier in the week with a button of liza manneli on it, what? I was as confused by that shirt as the gymnastics sign. 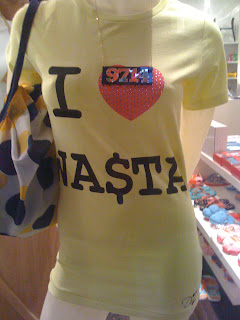 Confusing shirts are the best. My "I'm kind of a big deal" shirt always makes people look at me funny.

BTW - my captcha word is "cipro" ironic as you're getting meds overseas.